Only I was very, very pregnant.

And we were stationed in Japan.  Thousands of miles away from my Mama and Daddy.

School was out for two days–teacher work days at Yokota East Elementary where my third grader was in school.  We had gone up to the school to help Aub’s art teacher and my friend, Van, decorate a bulletin board in one of the rooms.  He is from South Carolina so the first time he met Aub and heard her accent, he asked to meet me, and we were fast friends from then on.

As we were wrapping up, another friend needed a ride from across base, so Aub went to lunch with Van, and I headed over to the commissary.  I met my friend and grocery shopped.  I picked up the Anthony’s Pizza two slice special, dropped my friend off at her house, and went back to our apartment.  I only ate one slice and I drank some orange juice because the baby (we didn’t want to know in advance the gender) hadn’t moved in a few hours.  The OJ did the trick, the baby moved, and I was happy.

Later I picked up Aub and dropped a present off for our favorite twins who were having their birthday that day.  They had begged me to have the baby on their special day.  I hugged them and said, no, no baby yet, and we went back home.

The Fella was working a military exercise out on the Japanese base about 45 minutes to 1.5 hours away (depended on the Tokyo traffic), which had him getting  home in the wee hours.  I had put a roast in the crock pot and made a peach cobbler (yes, from canned *sigh* the real ones over there were several dollars each, but boy were they beautiful).  I was working that evening on the awards for a reading incentive program at Aub’s school  “Reading our Way up Mt. Fuji.”  I was telling Aub how to e-mail our Fella and tell him what we had cooked, and I stood up.  My water broke.  That had never happened before, and it was the strangest thing ever. Aub was worried, but I remember just laughing.  I was so surprised.

After getting cleaned up and ready, I quickly called The Fella, who went into game planning mode immediately.  He was very shocked as this was two weeks early.  He just knew he’d be done with that exercise before the baby came.  But this baby hadn’t signed up for military duty yet and was having none of that.  I called Van because he had agreed to help me with Aub in the event that something like this happened.  Our other southern friends were visiting his home off-base and I could hear their excitement.  Finally I called the house of the twins and let their sitter know.  I called back home, as it was early morning there and let my parents and my sisterfriend know.  Then it was time to head out.

I got my stuff together quickly, and we wheeled my little suitcase out the door, to the elevator, and down to our van. Carrying the suitcase across the grass, I thought maybe I shouldn’t be carrying it, as it was a little heavy.  Then I laughed, what would it do?  Put me in labor?  Ha.  We cranked up, and I drove us to the hospital just a short way down the road.

I don’t remember a whole lot about the next little bit until Van and Vernon, our other friend and Aub’s PE teacher showed up.  They were all smiles, and they decided to take her to eat at Burger King.  Since the baby was still breech, I was having an emergency C-section, and they knew they’d be back before we were ready for visitors.  As they were leaving, the Fella showed up.  He had been so worried about making it in time.  He said to begin with, he drove cautiously.  After that, he thought, no this is my baby being born, and there’s no second chances on this!  I don’t think I was ever so glad to see him as I was then.   I gave thanks that it looked like she’d make her way into the world during the period of the day when it was the same day in Japan as the States.  I had stressed so much over what if it was one day here and the next day there, and what would be her real birthday.  Yeah, me and Anxiety Girl go waaaay back.

It really wasn’t long before our precious baby girl, our Princess, was born.  Her given name means happy or joyful, and that is who she is.  We say she is our sunshine, but sometimes we have to wear shades.  From the moment she joined us on this journey, she was making people smile.  Vernon’s wife showed up at the hospital to meet our girl in her pajamas.  She said, “I wasn’t going to come, but then I thought, this chance doesn’t come along very often, so here I am.”  And she loved her velvet baby, as she called her.

Our girl adores her big sister and considers it her personal responsibility to keep her little brother out of trouble.  She didn’t learn to read well until she was seven, and then she took off like a house afire.  She can’t start her day until she’s had her first bowl of cereal, sitting and turning the pages of her favorite book, reading as she eats.  Her favorite author is Daisy Meadows who writes the Fairy books.  She’s been known to lose her math book, and I don’t think it’s coincidental that math is her least favorite subject.  She loves dogs and cats, but especially Miss Sophie and Sugar.  She can go from picking up and “rescuing” lizards and frogs to getting a special treat manicure in less time than it takes you to say, “marches to her own drum.”  She cries at movies, and she worries over Amber Alerts and lost puppy signs.  Her favorite shows over the years have been “Melmo” (Sesame Street), Sid the Science Kid, Curious George, Olivia, Kratt Brothers, and Jessie.  She used to dance on the bed to the intro music to Hannah Montana, and now she loves ballet, tap, and gymnastics.  She loves to write stories, make people laugh, she’s a budding artist, and when she loves something I cook, she makes me feel like a gourmet chef.   She has a joie de vivre that is true and genuine.  She is often heard saying, “This is the best {day, meal, picture, book, story, birthday, etc} ever” and she sincerely means it.  She cries missing her Maemae and Cap, whom she first met when she was eight months old after our return from Japan.  She was the apple of their eyes.  She loved it when Daddy would carry her through the parking lots looking for Mustangs if she got a little restless at Stevi B’s Pizza.  And cuddling with Maemae to read a book was the best thing ever.  She is a Daddy’s girl, and the only person I’ve ever known who nearly sobs while crying tears of joy.  She asks hard questions from the gentlest of spirits, and I’m so honored and awestruck that I was chosen to be her Mama. 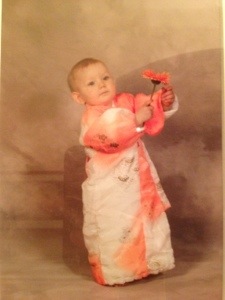 And our Sunshine, our Princess is turning nine.

I give thanks for her and her unjaded views on life.  She loves all folks, even the ones who are a little harder to love.  She has a heart of gold, which is appropriate as she one day aspires to be a Golden Heart at her sister’s, her Mama’s, and her Maemae’s alma mater–Wesleyan College.  In the meantime, we will stick with her third grade subject matter, keeping up with that math book, and getting excited over things like potato soup for supper or homemade “sushi” dessert to celebrate.  She is my Japanese baby, who is already doing great things to light up the world.  When she blows out her candle to make a wish, there’s no telling what will come into that beautiful, whimsical, quirky little mind of hers.  But I do know that whatever it is, she will smile and say, “This is the best birthday ever!”

Because that’s how our Princess rolls. 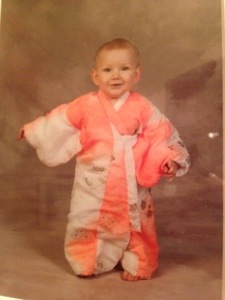 4 thoughts on “Rolling with the Princess”