Today a realization hit me, and I knew an apology was in order.

Days like this when my shortcomings walk up, introduce themselves, and demand my attention–they can be hard.  I don’t like looking in that mirror.  I might just consider taking seven years of bad luck if breaking it were possible.

A couple of days ago I was working on a project, and in the middle of it, it just felt so right.  I was mentally high-fiving myself at how well it was going, and when I walked away after I was finished I think I actually fist pumped.

Yeah.  It went that well.  I had not expected that at all.

Almost immediately after I left and was headed to my next stop, my mind started jumping ahead.  This.  This is what I was meant to do.  The way I felt in the middle of the project was a sign that this was my thing.  I began to envision doing this same type project only on a larger scale, more folks, more input, and so on.

Today it hit me.   Perhaps the reason it went so well and the reason it felt so right was that it was right.  Just like it was.  On that scale, in that moment.  Perhaps that is what I was called to do.  Not the same thing, just bigger and better.  But that thing just as I did it then.

Mama and Daddy encouraged us to dream.  They both told us numerous times over the years we could be and do anything we set our minds to.  They believed in each one of us.  I never doubted what I was able to do because they were there–that was it, they were there as I made choices and tried new things.  I could always come back to them and process what I had experienced.  And I could listen to their wisdom and make further plans from that.  Continue to dream, continue to figure out what my life’s vocation is, how my passions and talents and resources could help meet the world’s needs, as Frederick Buechner would say.

Only somewhere along the way I am afraid I fell into the Tim the Toolman Taylor mindset of “more power, more power” and “bigger is better.”  Remember the show “Home Improvement” starring Tim Allen?  If you could do it with a little saw, a bigger one was always better.  If you could build a small storage building, why not a huge one with all the amenities of home?  Yeah, that’s the guy.  It usually got him into trouble, that mindset did.  *duly noted*

There’s nothing wrong with dreaming big.  I have heard my Mama say, “Don’t underestimate the great things you can do.”

But I forgot about the other message, the one that Mama and Daddy shouted quietly with their actions: 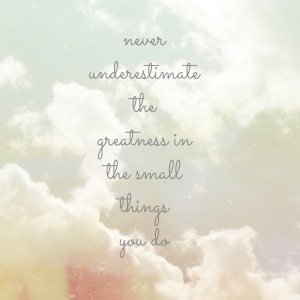 They lived that.  The things they did to help others, to encourage, to empower, to share, to help along–they did them quietly and faithfully and sometimes, without anyone else knowing.  So it was something they lived by, doing great things in everything they did; it didn’t have to be on a grand scale, and it definitely wasn’t to impress.  It was from their hearts.  That’s what made it great.  But like so many of the best things in life, it was so quiet and beautiful, you could miss it if you weren’t looking for it.

Greatness in the small things I do.  I don’t have to be doing the things that I’m doing in a grandiose way to make them worthwhile.  Perhaps that is what I was supposed to learn two days ago.

Not that this is what I should be doing one day.

But instead that this is what I should be doing today.

And let that be more than good enough.  Let that be great.

Daddy used to say, “When you compare, you lose.”  Oh how many times I have repeated that to myself or to my oldest!  It comes up whenever we start looking through the lens of comparing ourselves to another–how they live, what they do, what they have…..compare and you lose, because that’s not what we are here for.  But you know what I found out today?  When you compare where you are right now to where you dream of being one day, you lose too.  By comparing what I have right now to where I want to be one day, I am robbing today of its joy and its value.

My Mama taught me that stealing is wrong.  I don’t want to rob anyone, not even myself.  None of us can get today and this moment and this, this greatness we are in the midst of sharing, even if it’s in a small way–no one can get this back again.  Why make it meaningless by thinking it’s not enough?

Okay, so that apology.  I called and shared how excited I was with my Aunt after I was done.  She listened as she always does, to my dreaming and planning and thinking out loud of where I was headed with this.  I think I will call her Aunt SoFullofGrace, because she never said a word that wasn’t encouraging.  She let me figure this out on my own.  But I do apologize to her, because I was wrong.  And I was raised better.  I  apologize to my parents too, because they all taught me better–

It’s not so much what you do as it is how you do it.

I came across this today.  Those of you who have visited lately might notice that I have been on a bit of a Mary Oliver kick lately.  When I find a writer I enjoy, I tend to read as much as I can by them; it’s what our people do.  And so today, I found this gem.  It is from Part 1 of her poem, River Clarion.

I don’t know who God is exactly.

But I’ll tell you this.

I was sitting in the river named Clarion, on a water splashed stone and all afternoon I listened to the voices of the river talking….

And slowly, very slowly, it became clear to me what they were saying.

Said the river I am part of holiness.

And I too, said the stone.

And I too, whispered the moss beneath the water.

I’d been to the river before, a few times.

Don’t blame the river that nothing happened quickly.

You don’t hear such voices in an hour or a day.

You don’t hear them at all if selfhood has stuffed your ears.

And it’s difficult to hear anything anyway, through all the traffic, the ambition.

As the days grow shorter and the light grows dim, I want to be a part of what is sacred and light-bearing in the world.  I want to be a part of the holiness with the river and the stones and the moss beneath the water.  It’s been too long, my head filled with the busyness of being in the traffic, contributing to the traffic, and yes, filled with ambition.  It is time to sit and listen to the holiness around me and unstuff my ears.  And let this moment and all the greatness in the small things be enough.

2 thoughts on “The Greatness in the Small Things” 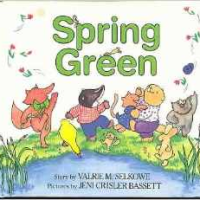