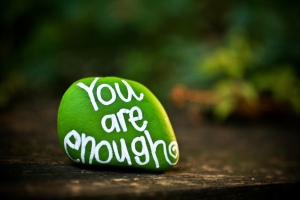 My friend and I were talking on the phone Thursday about where our faith and our lives were heading. “Sometimes I’m just worried I don’t do enough,” my dear friend said.

This breaks my heart.

This word has haunted me most of my life. I am sure that it is the cause of many folks sitting on the couch in the room of their therapist, seeking to hear that they are. Enough.

Enough to be chosen to be a friend.

Enough to be faithful to.

Enough to be truthful with.

Enough to laugh and have fun with.

Enough to change plans to spend time with.

Enough to stand up to others for.

Enough to be paid attention to and respected and cherished.

Enough to be loved.

My friend who worries if she does enough? She has walked most of life’s darkest pathways with me. She loves fiercely–her family, her friends. If you “belong” to her, you never doubt where you stand. You are loved. And she worries that she doesn’t do enough? Where is this stuff coming from?

From our society, our culture. You are not enough unless…..You do not have enough unless…..You do not do enough unless…..these thoughts flash through my mind as fast as the commercials that send these messages flash on our television screens. We are told that no matter where we are, what we are doing, how we look–“enough” does not even enter into the picture. If you don’t believe me, take a moment at the checkout stand at the grocery store. Look at the headlines on the magazines. Most of them thrive on telling us we (don’t do, don’t have, are not) enough.

Tonight I saw the heartbreak in a mama’s eyes. The culprit? The message that one she loves is getting–that she’s not enough. Oh we as Mamas, as daughters, as sisters, as friends–we can tell the one we care about– You. You are enough. More than enough. But the voices of our peers, of the society we live in, of this world? They tell us we will never be so. And those voices all too often, unfortunately, are much, much louder.

I told this beautiful Mama, who ministers to so many, “You are a good Mama.” She is. And even though she can’t prevent the pain from happening or fix it when it does, she is ENOUGH. She’s a beautiful soul who shines like a new penny, with a rich hue of grace and love she generously gives to others.

I told my friend who worries about how much she does, who says she “only” spends time loving her friends and family, “If you are loving those around you as much as you can, then you are doing enough. That loving has far-reaching effects you may never know about.” The grace and love we give to someone else gets passed along.

Tonight I listened as my own daughter shared the story of backing into another car. She is friends with the other car’s owner. He and his whole family showed her such grace and forgiveness and love. It made a huge impression on her. She has passed that grace on to others….. like the folks in traffic who frustrate her. She said, “I was given grace I didn’t deserve, so I can pass it along.” I know what she means. After this family was so kind and gracious when I spoke with them, I was later able to love on some folks in a very difficult situation. And it was not really hard at all. That is the ripple effect of love and grace.

Just as the good and the grace and the love get passed along, so does the yucky stuff. If we are frustrated or angry or intolerant and share that, in whatever form that might take, believe me, it gets passed along just as quickly, if not quicker.

So here’s an idea. Let’s make a pact. Let’s be the ones to say ENOUGH. And let’s tell someone now that he or she is ENOUGH. Look her in the eye. Take her hand. And tell her truly and passionately and with all the love you feel for this person, You. You are ENOUGH. There are enough folks in this broken world telling those we love just the opposite. Let’s be the voices of grace and love and be the ones to start the ripple of good stuff today. And if you do this, love others with all your hearts, you, my friends, ARE ENOUGH.

The message below is brought to you with a giggle by a friend who shared this with me many years ago. A great mantra for us all–share it with others!

One thought on “Enough” 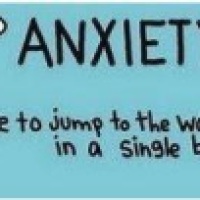