A week ago Cooter and I traveled up to Wesleyan to attend Core Ensemble’s production of “Ain’t I a Woman.”

Many years ago, I read Sojourner Truth’s words calling for men to get out of the way and let women fix the world.  I fell in love with her then.  A strong woman who had suffered through so many hardships.  I knew when I saw that this was being performed that I had to go.

Amazing is an understatement.  One young woman played four different roles.  One young man played the piano with music that suited each story.  Between the two of them my eyes were opened and my heart was touched.  And broken.

The first woman to come on stage was a sassy Zora Neale Hurston.  She was delightful and the music was a bluesy jazz that I adored.  Laughter was heard all through the audience when she said, with her head cocked just so:

“Love, I find, is like singing. Everybody can do enough to satisfy themselves, though it may not impress the neighbors as being very much.”

The next woman to come out and visit for a bit was Clementine Hunter, an elderly artist whose story was fascinating.  I loved her accent and her passion for what she was doing.  That she didn’t begin painting until she was in her 50’s was an encouragement to me.  When she showed her painting of a young couple being married, she pointed out that the bride looked scared.  The groom did too.  “Men need to be scared,” she adamantly stated.  Ha.  She was delightful right up to the end, when she “kicked” us all out because she had work to do.

Sojourner Truth was powerful and to the point.  I have seen her speech re-enacted by many women, but I still get chill bumps each and every time I hear those words.  “And ain’t I a woman!”

What an incredible story–this woman who set out to register to vote because IT WAS NOW LEGAL for her to do so, and she lost her job.  It only got worse from there.  On the way back from a conference in Charleston in 1963, she and her traveling companions were stopped in Mississippi and arrested, jailed, and beaten.

I was on the edge of my seat.  In tears.  I was willing for the words she was about to say, for the story she was telling about what happened to her–for those words not to be the horrific ones that they were bound to be.  I didn’t want to hear them, but more than that, I didn’t want them to be true.

Here’s something I want y’all to know.

We are teaching history all wrong.

If we want to make an impact on our young people, if we want to make them want to change things for the better so things like what happened to Mrs. Hamer don’t happen again, we need to do just what the Core Ensemble performers did–take it out of the book and make it come to life.

Because I walked out of there, weeping on the inside, torn up over a history that I didn’t cause but one I haven’t really worked to change either.  And things like this are still going on.  Discrimination.  Racism.  Bigotry.  Hatred.  Abuse of power.  Slander.  Exclusion.  So many hard and horrible wrongs are still happening.

When I sat there and saw Ms. Hamer’s body react to the lashes she described, when I saw her walk weakly across the “room” from her “hospital bed,” when I watched her hands bound in her gown “handcuffs,”  I wanted to jump on that stage and stop it right then.  I was glad that my oldest, who has just begun in earnest on her journey of who she is becoming, was there to witness the horrors that have gone before.  I was thankful that her heart was touched.  As were the hearts of many of her friends in the audience.

I did notice one young woman a few rows in front of us, whose head was bent over her phone or a pad of paper, it was hard to tell which.  She rarely looked up at what was playing out in front of her.  I wondered later if she would just rather not have been there, or was that her way of avoiding a story that was too painful to bear.

Tonight I’m thankful for the opportunity to hear the stories of these courageous and ordinary women from “their own” mouths.  Their stories stand out but there are so many others like them, whose stories haven’t been heard.  My heart and respect goes out to them as well.  I’m thankful for having my eyes opened to what our country’s story was in the not too distant past; and I realize that many days we are still there, it’s just disguised in another way. 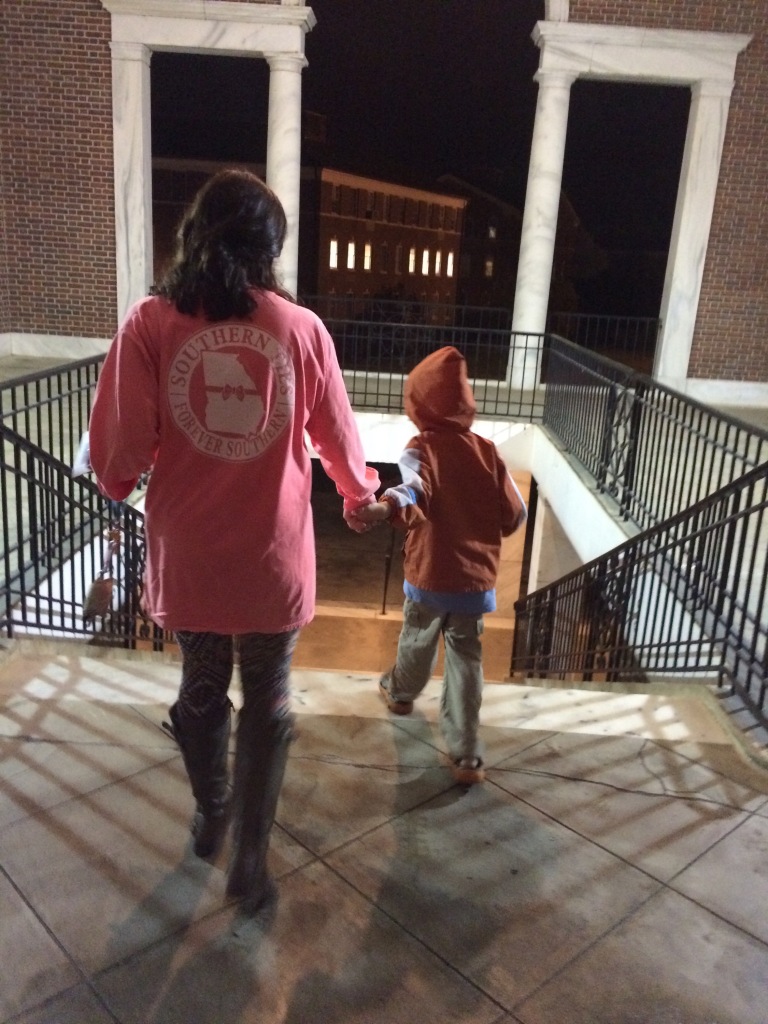 As I left Porter Auditorium last Thursday night, I watched my oldest and youngest walk together, and I realized that they are the ones who will change this world for the better.  I am doing the best I can, but I realize that one of the greatest things I can do for this world is raise children for whom these stories also bring frustration and a sense of what is right and wrong and a drive to stand up for those who have been wronged.  More than that, I hope I am raising them to cut off the wrong before it ever has a chance to get started.

Because, in the words of Mrs. Fannie Lou Hamer, “Nobody’s free until everybody’s free.”

2 thoughts on “Until Everybody’s Free”