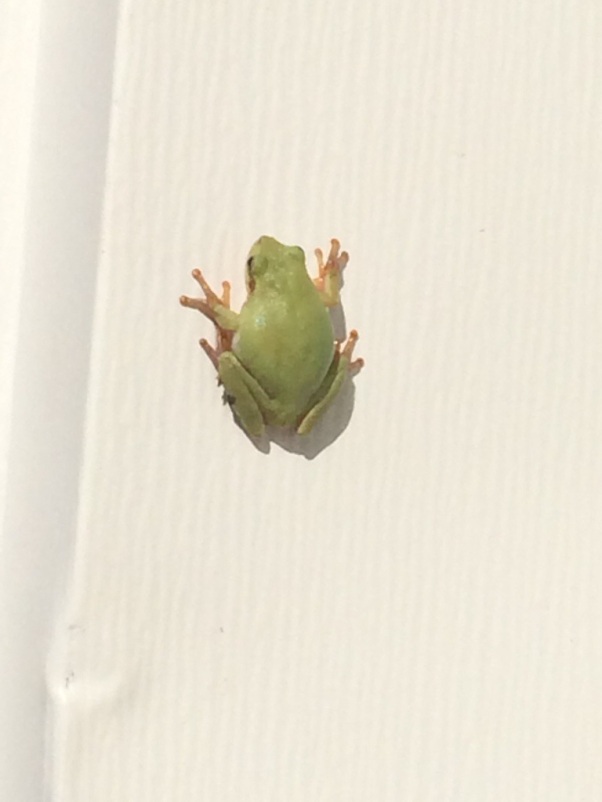 This little guy was waiting on me outside the other day. He made me smile. So cute. But I couldn’t get too close. I just wouldn’t. He was precious but those things can jump, did you know?
Family lore has it that one evening many years ago (I think it’s been 41), my Mama, who was pregnant with Mess Cat, was taking a shower in our little bathroom at the old house. The bathroom had a window over the shower which they cracked sometimes for ventilation. This particular evening Mama had a guest in the shower. A little green guy just like this one. He was camouflaged by the greenery outside the window until…..
he jumped in on top of Mama.
Landed right on her.
Bless her.
She did what anyone would do–screamed and ran out of the shower as fast as she could, never mind her wet and unclothed state. I remember standing in the doorway of her dark bedroom, the light from the hall sweeping across the bed where she lay sobbing. I was four, and all I remember thinking is “Poor Mama. My poor little Mama.”

I was thinking about that when I saw this guy for two reasons.
Number one, I was not going to put myself in the jump zone. Zoom on the camera works just fine thank you very much.
Number two, I wondered at how, despite this frog story, the frog became Mama’s totem. We gave her all kinds of frogs over the years. I even made her a fleece blanket covered in rainbow frogs. And she LOVED IT. I have no idea. Maybe it’s because she was a good sport? And it just caught on?
Maybe. Because she was definitely a good sport.
It’s funny, isn’t it? The things that just are and you never think to question it. Until one day you do and you find the answers are gone with those you love.
Tonight I’m thankful for all those years Mama received our frog gifts and loved them and put them on display or used them and said they made her “very hoppy.” Yeah, not only was she a good sport she was also very punny.

Wishing you a day filled with many hoppy moments. Love to all.

6 thoughts on “Mama and the Little Green Frog”