Tonight we had the great honor and privilege of being with friends who are like family.  We celebrated Christmas with them by being together, laughing, eating, catching up, and going to the theater together. 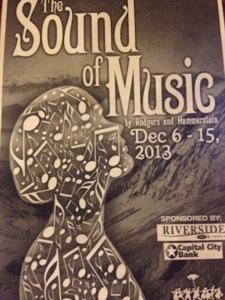 Theatre Macon in downtown offered their performance of “Sound of Music” tonight as a gift to Daybreak, with all ticket sales going to the shelter.  What a beautiful gift!  Before the performance started, Sister from Daybreak shared that we all need to work hard but also rest hard, and she hoped it would be a good night for all of us to do just that.  To laugh, to have a song in our hearts, and to enjoy a wonderful performance.

As the nuns began singing about a problem named Maria, I was mouthing the words to our Princess.  She laughed and whispered that I was silly.  She and Cooter, our little guy, were up way past their bedtime, and this was the longest play they’ve ever been to.   With the exception of a few wiggles, they did pretty good.  And they had moments when they were totally entranced.

The cast was brilliant.  In the wake of all the negativity of  the Artist now known as “Someone Other Than Julie Andrews” playing Maria Von Trapp last Thursday night on live television, I guess I was a little nervous.

No worries.  The stories all over about how the musical is different from the movie version prepared me for the songs and song placement that were different.  The actors and actresses knew their lines perfectly and had beautiful voices that blended well together.  I adore Julie Andrews, but y’all, I never looked back tonight.  My Daddy used to say, “When you compare, you lose.”  And I think if I had spent the entire evening comparing this to the iconic movie version I would have lost a beautiful evening of entertainment and being with folks I love.

The talent was amazing, especially considering the first timers on the stage…..and the youngest actress–a kindergartener from our very own little town down here.  Y’all.  Precious don’t get any cuter than that.

She caught my eye immediately, as I suppose she did everyone in the theater.  But I was watching closely in the second half of the play, which I suppose was very likely past her bedtime as well, and I saw two of the older girls sit on either side of her.  I would not have noticed the “dead space” at all–it was not noticeable–if I had not seen one of the “sisters” put her hand on Gretl’s leg and the other patted her gently.  She promptly asked if Fraulein Maria was coming back.  Beautiful.

In this life we all need someone “older and wiser” to sit with us and give us a nudge or a pat or a shoulder when we need it.  We need to feel safe and secure on the stage of life, when one never knows exactly what is coming next.  We might know what we think is coming, but that is the beauty and tragedy of live theater and life itself–you never really truly know.  Someone could forget a line, miss their cue to move across stage, or just not show up at all.  Tears welled in my eyes when I watched how well those young actresses worked together.  If only we would take a lesson from that.  Don’t leave the folks around us hanging out to dry–if we can help, we should.  Remind folks what they already know.  Sometimes that is all it takes to get someone back on track.

Towards the end of the play at the Salzburg Festival, Liesl had Gretl sitting in her lap.  The stage was dim and the Captain Von Trapp was singing “Edelweiss.”  I saw Gretl look up at Liesl and whisper something.  Never stepping out of character Liesl, only fifteen herself in “real life,” gently “shhhh’ed” her little sister.  When Gretl attempted to communicate again, Liesl shifted the little one who had been rubbing her eyes only moments before in her lap and shook her head gently “no.”  Well done.  Well done.  Not everyone would be able to handle a sleepy kindergartener after 10 p.m.  I was impressed.  A few minutes later little Gretl went up and tried to hand her doll to Maria as she was having a conversation at the Abbey shortly before their escape into the mountains.  I noticed a couple of the older children reach for her just as if it were all scripted.  Which it might have been.  Mix live theater with a six-year-old and who knows what you might get.

Tonight mixing it with my six-year-old led to a magical ending.  Towards the end he was also a little fidgety.  And, as luck would have it, OH MY LAND, he wound up with the squeaky seat.  Let it move a millimeter up or down and it squeaked.  I just knew everyone around us was going crazy from the sound.  I finally pulled him over in my lap, this little fella who at one point had taken off his sweater vest (our nod to show respect to the theater and the folks performing) and a little later leaned over and whispered, grinning, “I took off my boots.  My feet were too hot.”  Ah yes.  That sounds about right.  Country come to town.

But he made it.  And so did our Princess who is a wiggler from the womb.  (I actually did not believe the sonographer when he said there was only one baby in there.)  Our sweet friends also made it through, saying our littles were well-behaved, despite all the wiggles and squeaks.  (Love y’all for that.)  When it was over, our two littles were bouncing up and down–“Can we go meet the characters?  Please?!”  I looked at the crowd waiting to do just that.  And I looked at folks crossing the rows and taking the more direct route out that I so longed to follow.  Cooter and Princess remembered saying hello after “White Christmas” two years ago.  So I said yes and told the rest of our group I’d meet them outside.

Cooter wanted to meet the boy who played one of the Von Trapp sons.  They have something special in common, and he was determined to meet him and ask him a question.  Princess wanted to meet Brigitta who had blonde curls like she does.  So we waited just a couple of extra minutes and wound our way around to say hello.  I called out the boy’s name, and he turned around with a big smile.  Bless him.  And then it happened.  As I was introducing Cooter, my little baby boy stuck his hand out to meet him and say hello.  Because that’s what our people do.  Only he never has before.  Ever.  I almost started bawling right there, but Princess wanted to meet Brigitta, so I had to shove it back down and keep on moving.  I got a beautiful picture of the four of them that I will treasure forever.  For what is actually in the picture but even more for what took place moments before.

My baby boy took his first step to becoming a young man.

Somebody hold me.  Now.

I’ve watched his legs pumping so hard moving him rapidly up and down our neighborhood street on his bike.  I’ve stood amazed and entranced watching those amazing little legs, the ones that wouldn’t stretch out completely for several days after he was born.  The ones he toddled around on eventually, later than the girls had, thrilling and relieving me all at the same time.  And now, less than two months after kicking the training wheels to the curb, he’s ready for the Tour de France.  I’m not kidding.  Move over, Lance, I got a real champion on my hands here.

Or maybe an actor.  After he asked the young actor how old he was, he said thanks and goodbye, and I, being a little starstruck myself perhaps, said with a lump in my throat, “You were both wonderful.  I know you will treasure the memories from doing this for a long time.” And with that cheesy, gooeyness we walked away.  Only to hear my Princess say, “I sure will.  This was the best play ever!”  That, my friends, is just how she rolls.  As we walked down Cherry to Third and to our car, Cooter piped up, still thrilled to have met his new friend, “I wanted to know how old he is, and when he said twelve, all I could think was you are just like me!  I mean, he is, he’s just like me!”  And that’s how it all starts.  His wheels are turning for sure.

Tonight I am thankful for different ways of celebrating and giving this Christmas.  For our friends who made time to be with us tonight and gave us the gift of good company, last minute as our plans were.  I am thankful for theater companies who donate entire performance’s proceeds in an era when that could have really helped them.  I am thankful for Daybreak where I spend one afternoon a week, but where my heart is all the time.  Spending time with my family and live theater all rolled into one always fills me with joy.   But most of all, I’m thankful for the exuberance of my Princess, the presence of my oldest who’s in the midst of finals week,  and that handshake I witnessed tonight.  The tears I cry over it are good tears.  Tears of love and remembering and gratitude for being there to see him take his next first step.  Those are the tender and thin moments of this life I live as Mama.  And I am thankful.

2 thoughts on “Six-Year-Olds and the Sound of Music”