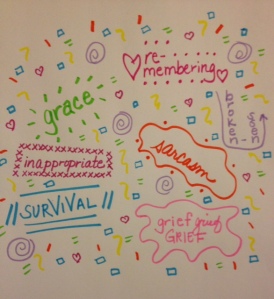 When my Daddy left this world, his two sisters, my Mama, my two sisters, and I were all right there with him. Less than thirty minutes later, my aunts and I were in the other room. We’d been sitting vigil since before daybreak, and we were all emotionally and physically exhausted. One of my aunts teased me about something, trying to lighten the moment. I looked at my aunt and offered an exaggerated pout, “I can’t believe you’re giving me a hard time…..my Daddy just died!” They laughed softly. “Oh, that was good, Tara. Good job.”

Inappropriate? Maybe. But they understood. It wasn’t the first time I’ve been inappropriate in my grieving and it probably won’t be the last.

A couple of months after Daddy died, I was so bogged down in the loss that I was crying in the shower regularly and just missed him so much. I was talking with my sister about it. She said, “You know Daddy wouldn’t want you being like this.” And without even thinking about it, I replied snappishly, “Well he ain’t here, is he?  So he doesn’t get a say.” Just the other day I told my Aunt that I kept doing things, half expecting Daddy to come back and stop me. And that I wish he would. I am pretty sure that if I don’t get my act together about some things, Mama will figure out a way to come back and set me straight. She’s always been resourceful like that. I told someone that and wondered if I really should have said it.  I do that a lot.  I say the first thing that comes to my grief-stricken mind, and then later think, “Uh oh. That sounded just about sacrilegious and downright disrespectful.” If any of those comments have fallen on your ears, I am sorry. I don’t mean to be disrespectful or offensive at all.

You see, in the past several years, that has become our relationship. Mama and Daddy knew I loved and respected them more than anything.  I ma’amed and sirred them right to the end.  But I would play at sassing them and they’d play fuss back. It was never about anything serious, just goofy stuff–like me giving them a hard time at letting my children have treats or watch a movie, all of which I was totally okay with. Or when Mama would want to send home the leftovers with us, and I’d sigh and say well, if I have to for goodness’ sake, but don’t expect me to do this again. Good-natured sarcasm was a mainstay. We lived for the playful banter.

And I miss it.

I was thinking about this the other day when I remembered a particular family I worked with in Hospice shortly after I was hired. A young mother, metastasized cancer, they waited until the very end to admit her to our program. I was at the house a lot, especially in the few weeks after her death, spending time with the children. The patient’s brother stayed in town for a little while after the service. One day he was trying to convince his brother-in-law, the grieving widower, to take a day off from work and go play some sport with him. The widower was reluctant; I think he’d taken a lot of leave over her several year battle with cancer. The young woman’s brother said, “Come on man, you can play the ‘my wife just died’ card. It’ll be fine.”

Quite honestly I was shocked and appalled. All at the same time. How could he even think such a thing, let alone say it out loud?

Ah, the indignation of youth and ignorance.

Because I get it now. I look back now through the lens of my own grief and realize that it was his way of dealing with losing his sister. He was flippant and irreverent and some might say inappropriate. I know I did back then. But he was surviving. He was making light of a horrible, tragically sad situation in order to hold it together. Because if he–if I–really shared any of what was in our hearts, the floodgates would open, and there would be no turning back. All of that brokenness, shattered and scattered like a mirror that has been shot clean through, would be so far gone there might be no putting it all back together.

And so we joke. We kid. Around here if someone says “Maemae wouldn’t like that,” it’s quite likely a “Well then she needs to come back here and tell me to my face” will follow.  We miss them. We miss their laughter, their wisdom, their love, their hugs, and just being with them. Being with them and taking their presence for granted, that would sure would be nice. Because, unfortunately, that’s how we lived…..before the cancer, before the illness, before the surgeries, and the sadness. We took each other for granted. It sure was good.

It has taken a dozen years and tremendous heartbreak for me to look back and understand the words and reaction of a young man whose sweet sister lost her battle with a horrible disease. I wish I could go back now and whisper in the Tara of yesterday’s ear–“Hey, cut him some slack. It’s not inappropriate. It’s survival. Give him the grace he needs. Because one day, sooner or later, we’re all going to need that grace.”

Survival and grief are gritty and hard and raw.  Not pretty.  Or easy.  And the only way to find that out, unfortunately, is to go through it.  Which is why I didn’t get it twelve years ago.  But today, today I understand.  All too well. What looks like indifference or irreverence is often just a way of holding the pieces together.  One moment at a time.  Sometimes that’s just the best you can do.

2 thoughts on “Inappropriate to One, Survival to Another” 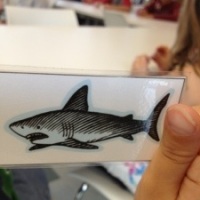