So I made myself a stir fry of sorts for lunch yesterday.  And when I was done, I thought to myself, “It’s such a pretty plate!”

Over twenty years ago (how did that even happen?) I was director of a child-care center for low-income families whose parent(s) were working or in school.  I was still wet behind the ears, but I loved what it was about, so I got in there and let the dear ladies who had been there for many years teach me what I needed to know.

Two of the ladies I worked with were over retirement age–Miss Dot and Miss Aileen.  At one point Miss Dot had been director of the Center, and while she no longer worked full-time, she loved it too much to let it go completely.  She was a wonderful resource and a spunky, sweet lady.  She lived with her 90-something year old mother.  Who credited her advanced age and good health with eating an apple a day.  They both had lived through loss and dark times, but instead of being sad, they were bearers of light and laughter.  Oh the stories Miss Dot could tell!

Miss Aileen worked as the Administrative Assistant, and she oversaw the food program sponsored by a government program.  Certain criteria had to be met in the meal planning–breakfast, lunch, and an afternoon snack.  The two year olds got a snack mid-morning as well.   Miss Aileen planned the menus, did the grocery shopping, and kept up with the paperwork that had to be submitted.  She was a busy person, and when it came to feeding our little ones healthy meals, she didn’t play.  We had food vendors who tried to sell her on more of the already prepped things like chicken nuggets, fish sticks, reheatable casseroles.  She was having none of that.  I think she was ahead of her time in a way, as she believed it was important for the children to have home-cooked meals.  As a matter of fact, I quit calling it lunch.  Whenever I went out speaking about our non-profit agency, I referred to the noon meal as dinner–because most days it was so much more than a lunch.  For three and half years, I was lucky enough to get to eat these meals planned out by her and prepared by the loving hands of our two cooks.  Some of my favorites were tallerine, salad, and rolls.  (I had no idea what tallerine was before I started at the center.)  I loved the ham, potato salad (made from scratch), and snap beans.  We had chicken pie (again from scratch, including the crust–ooooh, especially the crust), baked chicken, barbecue chicken, homemade macaroni and cheese.  Our menus tended to go on a five week rotation, but she was not above switching something up if she found something on sale.  One of my special memories is the pancake breakfasts that cycled through a few times a month–delicious and again homemade.  When I was pregnant with my oldest, our sweet cook would save me a small plate of them and I would enjoy them with a glass of very cold milk when I arrived.  Mmmmm.  Our meal we particularly liked to invite guests in for was the chicken tetrazinni, cooked carrots, and butterbeans meal.  Delicious.  I had the privilege of sitting at a table with both of these women many a day.   At certain meals, one of them would inevitably look at her plate after the blessing was said, before taking the first bite, and say appreciatively, “Isn’t this such a pretty plate?”  I learned to appreciate the beauty as well as the tastes in planning and serving a meal.  Whenever I make an especially colorful meal, I think of them and smile, knowing they’d really be pleased with this one.

The thing that I loved and respected about both of these women is that neither took the easy way out.  Both well beyond retirement, they chose to be a part of these precious little ones’ lives.  They sure weren’t doing it for the money–I know, I signed their paychecks.  They did it for the hugs, and, I think, because they took it seriously when they read in the Good Book those things about taking care of the little children.

Miss Aileen didn’t take the easy way out when it came to the meals either.  How much time and resources would it have saved to serve more pre-made items?  But she had heard the stories.  She knew from other staff who had seen it firsthand–for many of the children, this was the only home-cooked meal they would get that day, maybe even the only meal.  She worried over their nutrition when the littles ones talked about walking to the store with an older sibling to buy a bag of chips and a drink.  Easy never entered her mind–she worked hard to plan food that looked good and smelled good in the hopes that they would learn to try and love new healthy foods.  (She even had me trying beets–no, we won’t talk about that tonight.)

These women definitely didn’t take the easy way out when it came to what was socially acceptable among many of their friends.  As our center served almost 100% African American children and their families, they both had friends who didn’t understand why they, both Caucasian, even bothered.  Surely they could be spending their time some other way, at the teas and luncheons and charity auctions that helped care for others.  It made me sad when one of them shared that she had lost a friend or two who could not grasp why she was spending her time with our children.  She looked sad for a moment, and then one of our sweet ones walked by the office and popped in for a hug and a chat.  She smiled and I knew where her heart was.  They both were much older than I am now when integration occurred.  Both born and raised in a culture that was reluctant to let go of its past.  No, they did not take the easy path.  These two amazing women paved the way and inspired women like me to say no to easy and to stand up for others, especially those who may not have been heard before.

They were truly special…..they taught me to love all, no matter what those around me might say, and to appreciate beauty everywhere–even on a dinner plate.  Tonight I am thankful for a colorful stir fry that stirred up memories of these colorful ladies, whose lives inspire me to do what is right, no matter how hard it may seem.  Such a pretty plate, such a beautiful example.

6 thoughts on “Such a Pretty Plate” 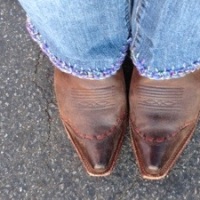