Earlier this week Mess Cat told me she was listening to the radio, and the DJ asked the question, “What TV show do you watch and wish your friends did too so you could talk about it?”

She said a woman called in and said, “The Young and the Restless.”

Only I always had someone to talk about it with.

My first experience with the soap operas was when I was much younger, and Mama took us to Macon to visit my great great Aunt.   After our dinner with them, she and Mama sat in the living room watching the noon news and “Date with Del.”  After Miss Del said her trademark, “Trody tro,” the soap operas began.  Mess Cat and I were laughing the other day about how we all froze and were very quiet, in the hopes that they wouldn’t realize the soap opera had come on and we could watch it.  Sometimes it worked.

I was in college the first time I saw “The Young and the Restless.”  It was on during everyone’s free time of the day–from 12:30 to 1:30.  I remember the day that something bad happened to a fan favorite, and the cries of disbelief could be heard up and down the dorm hall.  We all wandered out of our rooms, crying and talking about how it just could. not. have. happened.

When my oldest (and only back then) and the Fella and I moved to Japan and I knew NOT ANOTHER SOUL, one day I turned on the TV and there was a familiar face.  A person I had known all through college.

That was the only CBS soap that was on the TV over there.  And it meant so much to have something that hadn’t changed in a life where EVERYTHING else had changed.

That’s kind of the nice thing about soap operas.  Not much changes year after year and if it does, it doesn’t take long to catch back up on it.  And besides, it’s storytelling.  Maybe not at its finest, but it’s storytelling nonetheless.  Those writers can have me go from barely tolerating a character to rooting for him faster than you can say, “As the World Turns.”  That’s pretty good writing in my book.

So the irony of Mess Cat bringing up Y & R the other day is that, though I haven’t watched it in years on a regular basis, I like to record the episodes around Christmas and New Year’s each year.  I don’t have the time to watch it regularly like I used to, but around the holidays…..The decorations are so lovely and everyone is so kind and the music is beautiful.  I think my love of jazz came from watching restaurant scenes on soap operas over the years.  At Christmas it’s just–

And when I had questions about how two of the women who had been rivals were sisters?  My sisterfriend who has always enjoyed watching the show and sharing with me caught me up to date.  In about three sentences.

And that’s another reason why I love them.

On the Christmas Eve episode, a woman, her husband, and her son were gathered together for the holiday meal.  After a few minutes of conversation, the husband said, “Well, let’s address the elephant in the living room.  What we are NOT talking about.”

I had no idea.  Last I knew I thought he was about to go to jail maybe?  But then, it’s been a while.   At least a month in soap opera time.

He then proceeded to get his family up and dance around singing out the word.  Cancer.  Naming his enemy.

That made my day.

I wish we had done something like that.  Stood up to cancer, looked it in the eye, and said we weren’t afraid.

But I digress.  Anyway–

I know that many folks, like the radio DJ, think soap operas are a thing of the past.  And from the looks of things and the number of soaps that have been cancelled, it looks like that might be a valid argument.

But *true confession* I sure hope not.

In this life of so many things changing and so many folks leaving without a good goodbye, I sure do like to flip on the channel every now and then and see Victor, Nikki, Paul, Jill, Jack, and the whole Newman and Abbott clans.  I’ve known them longer than a lot of my real life friends.  And while I know the difference between real and make-believe friends, there is still comfort to be found in the familiar.

Tonight I’m thankful for things that don’t change and for story lines that touch the heart and the funny bone.  And for friends who can catch you up on things when you’ve fallen behind.  On story lines and on real life stuff.

Wishing you all a friend to talk about your favorite show and life in general with.  And if you’re a closet soap fan, know you’re not alone.  It’s okay.  As my friend wrote me today, “There’s a whole lot worse things to be addicted to.” 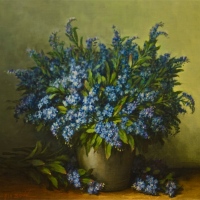